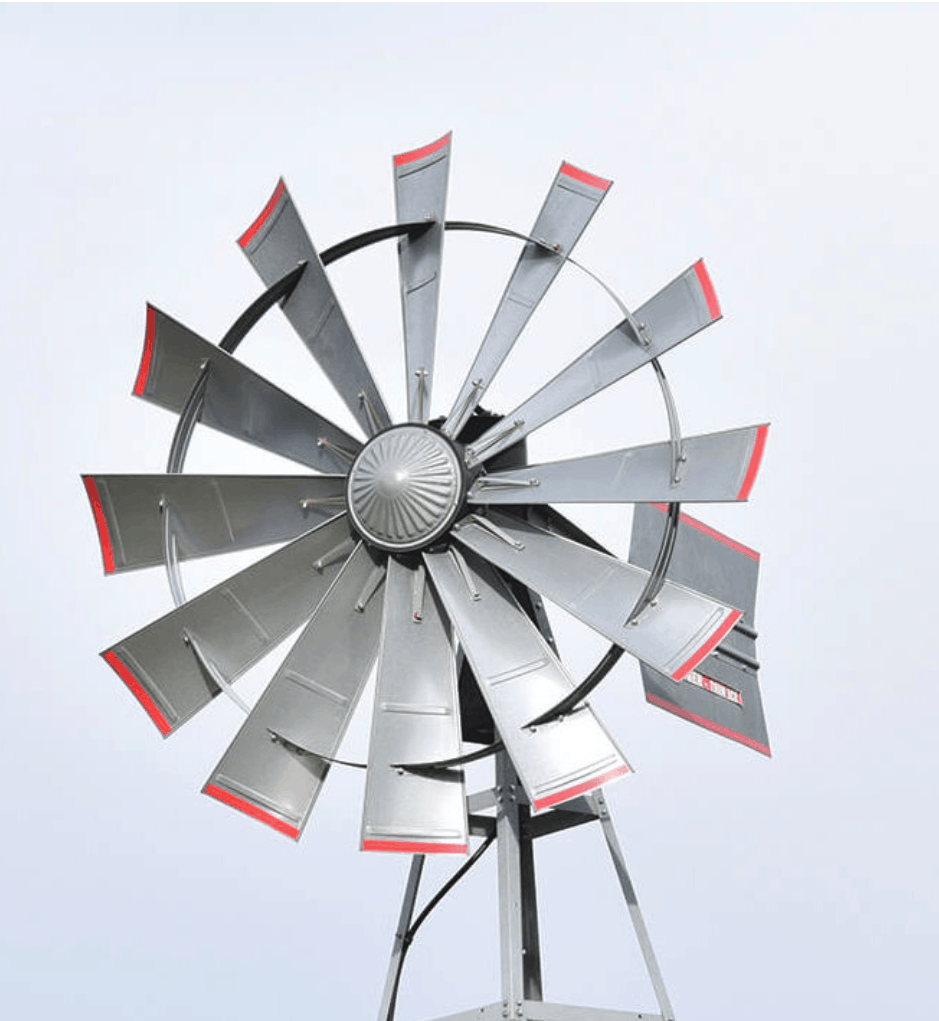 Ponds benefit tremendously from aeration simply because nothing will do more to increase oxygen levels and improve circulation in the water. This greatly improves the health and natural vitality of a pond and it can protect and provide an improved home for fish and other wildlife.

Pond aeration systems normally run on electrical power which can limit the places where they can be installed. Or it used to be that way. Windmill aeration kits are changing that.

With current windmill aerator technology, you can expect to see positive results in ponds of small to moderate size.  This range includes backyard fish ponds up to bodies of water with several acres of surface area.  In fairly light winds (around 9 mph) their air output, as measured in cubic feet per minute (CFM’s), matches that of an electrically powered 1/4 HP rocking piston compressor.  For efficiency, windmill aerators are unmatched.  Powered by wind currents, they cost nothing to run, and are estimated to save $30 to $50 per month in operational costs. They will typically provide years of dependable use with minimal maintenance.

It’s funny in a way that some windmill aerators are thought of as something new. If you travel around the Midwest, it’s not uncommon to see old farmsteads that still have windmills standing nearby. Most are not operational any longer but in the old days this was the way fresh water could be pumped to the surface for people and for livestock.

Today’s windmill aerators for ponds also use the power of the wind to drive a compressor pump which forces air through an airline, down to a diffuser which sits at the bottom of the pond. This is very conventional in terms of how it works, and what it does for a pond system, and the only difference between a windmill aerator and an electrical one is the power source. Actually I should clarify that and say, it’s not the only difference but it is the primary one.

Modern windmill and pump technology has closed the gap between wind driven and electric powered aerators. One of the top windmill aerators on the market today will produce about 3.0 to 5.0 CFM (cubic foot per minute) of airflow and is very comparable to a 1/4 HP electrical compressor. This output of course is based on adequate wind speeds. This is the one primary difference between wind driven systems and electric or solar powered aerators. The wind must be blowing for it to work at all.

Due to improved aerodynamics of the fan blades, efficiency has improved quite a bit and even the lightest winds will provide some degree of aeration. The ideal wind speed should be somewhere around 10 mph or higher, to get really good air output out of the diffuser in the pond.

Most of the windmill aeration kits that you’ll find on the market can be erected to stand somewhere between 12′ and 25′ which also helps expose the windmill to air currents.  Within most current brands, the height is the significant difference in the models.

The vast majority of windmill aeration kits that are sold today use a diaphragm pump or compressor. These have the potential output of around 30 psi which allows them to be used at depths up to about 30′.

Output of the windmill systems today usually produce somewhere between 0 to 5.0 CFM.  This output will of course be based on wind speeds but also the size and design of the fan as well.  Larger bladed fans will usually produce better output.  Most aerators are set up to provide motor protection against over-speeds in very high winds.

Support structures for the windmills can be found in three leg, four leg, and single pole configurations.  Some of the single pole models can be easily erected or lowered through a telescopic feature which can make repair work quick and easy. Most models use metal beams for the base, however a more rustic wood frame was introduced recently which some people might prefer.  The four-legged platform has improved stability over the other options.

How Many Diffusers Can Be Powered With Windmill Aerators?

Most windmill aerators will come packaged with a single diffuser.  This is the part of the system that sits at the bottom of the pond and diffuses the air being pushed through it.  Usually a rubber membrane with very, very small holes in it will be the mechanism for diffusion.  Airstones are also used by some manufacturers for this purpose.

When considering how many diffusers could possibly be run with a windmill aerator one has to look at the overall output of the compressor.  In most cases the goal in using the aerator will be to produce about 3 cfm’s and certainly more if you can get it.  From experience, our goal has always been to allocate about 1.5 cfm’s out of every diffuser, whether we are using a windmill, solar, or regular electric aerator.  Dropping below this level, normally doesn’t produce very good results in the pond.  So my suggestion is to use up to 2 diffusers per windmill pump and no more.

When using multiple diffusers, you will also have a valved manifold to direct airflow however you may want to.  Each diffuser must have it’s own control valve so that equal distribution into the pond can be achieved regardless of how deep (or shallow) the diffusers might be placed.

In lighter wind conditions, you may find that one diffuser works well while the other does not, and that’s simply because there isn’t enough air flow to adequately power them both.

For pond owners who are looking to rely less on electrical power there are two eco-friendly, cost saving options.  Wind and solar. Which is a better choice for you will depend a lot on where you live and the kind of budget you have to work with.

Let’s start with the geography.  For a windmill aerator to work well, you need wind and ideally some sustained winds.  They don’t have to be high, just consistent.  In some places around the country, wind almost seems a constant.  My visits to Wyoming come to mind…it always seems windy there!  So if I’m in Wyoming or on a higher point of land, or even an open flat area with no obstructions, and I have observed some reasonably consistent breezes, I would strongly consider a windmill aerator.

On the other hand, if wind is sporadic at best, I would start to lean more heavily towards solar aeration.  It would likely lead to more consistent operation and that’s really the key with these off the grid systems….you want to get the most run time out of them that you can for the best results in the pond.

Solar aeration certainly isn’t perfect.  You won’t get aeration at night, and this is often when oxygen levels are lowest in a pond environment.  But you will most surely get consistent aeration during the daytime, and that can go along way in itself.

So, what about costs comparisons.  Well, windmills win out here by a bit of a margin.  A typical high quality windmill aerator will cost around $2200 or a bit more for larger designs.  In comparison, commercial solar aerators will often start around $3400 and will go up from there, depending on their capabilities.  Solar aerators with full time battery backups can cost into the low five figures, but they do offer the most operational run time of any off the grid aerator.

In the end, there is a simple idea to work with.  Any aeration is better than no aeration.  In most cases adding and windmill or solar aerator will help the pond and it’s inhabitants in numerous ways.  Just go with want makes the most sense for your situation and your wallet.

If there were one main redeeming feature of windmill aerators it would be that they will generally offer a continual benefit with a one time cost.  For their output, they are much more affordable than many solar powered aerators at the moment, and there are no additional costs for electricity.  Most electrical aerators will cost somewhere from $10 to $30 per month to operate so this becomes an immediate savings with the  windmill systems.

The cost to purchase a windmill aerator can be a bit higher compared to an electrical powered system.  A recent review of some of the online offerings indicated that most of the higher quality windmills averaged $500 to $800 more to purchase.

All of the models of windmill aerators today come with descriptive and helpful user and installation manuals.  It’s important to follow the manufacturers recommendations closely to ensure the proper set up and operation of the windmill aeration system.

Some of the more popular brands of windmill aerators include lines from Outdoor Water Solutions, Mescan, American Eagle, and Becker windmills.