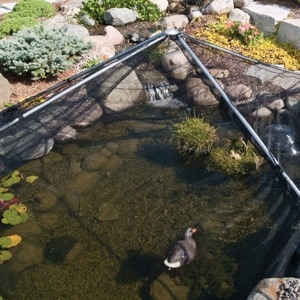 For small pond owners with fish, there’s one thing you simply do not want to see hanging around your pond.  And that’s a heron.

In actuality, any type of wading, fishing bird could spell trouble, but Great Blue Herons seem to top the list of trouble makers when it comes to goldfish or koi ponds.  And they are effective hunters.

Stories abound from pond owners who have watched as their fish numbers dwindled with the arrival of one of these winged hunters.  They are opportunistic, patient, and persistent, and they can cause a lot of trouble for valuable fish.

It should be noted up front that all of these birds are protected by law, so physical harm or eradication is really not advised.  So a pond owner will normally turn to some type of defense.  And we’ve seen a lot of them over the years.

So how do most of these tools stack up in the real world?

Well, the report on many of them really isn’t all that good.  Despite what many marketing folk might suggest, decoys, sprayers, shiny lights and flashing things, are simply no guarantee that a bird will be deterred.  I’ve come to think of Herons as a relatively smart bird, and when an easy meal is at stake, they’ll put up with a lot.

What makes the task of defense so difficult is that you can’t watch the pond from dawn till dusk.  And one never quite knows when a bird will show up.  In most parts of the country, spring and fall tend to be more common periods, but in reality, anywhere that Herons nest or winter could be viable territory for them.

So in the end, here’s the one tool that seems to work better than anything else…and it’s simple and probably won’t come as a big surprise.

Without question, the one thing that the vast majority of pond owners reported as effective was some type of pond netting.  Ideally, the net should be elevated above the water, with some type of under-structure to support it.  Any netting is really better than nothing, but for full protection, I prefer the elevated type.  Make sure the mesh is relatively small and tight.  It doesn’t have to be super small but a 1/4″ to 1/2″ mesh is ideal, and anything up to about 1″ is acceptable.

We often think of netting as a useful tool during the fall to keep leaves and debris out of the pond, but in truth, it’s a valuable thing to have around at any time of year.  You want something that’s easy and quick to deploy as well.  This isn’t something you would necessarily need to leave over the pond all the time (although you could).  But in times of trouble, people simply got the best results from covering the pond until the intruder left the area…and usually that happens pretty quickly if they arent’ getting a few easy meals.

Although we talk a lot about pond and watergarden care, it would be a mistake to not talk about the potential hazards that lurk in any small pond. This article reminds us not to take safety for granted in and around the water.

Did you know that every year over 830 children 14 and under die as a result on unintentional drowning? In addition, children suffer around 3,600 injuries each year because of a near-drowning incident.

Drowning is the second leading cause of unintentional death for children aged 1 to 4 and aged 10 to 14. Although the most common place for drowning to occur is in swimming pools, home ponds also pose a serious risk. Even a very shallow pond can be a danger; young kids can drown in as little as two inches of water.

Every pond owner should always have pond safety in mind, whether they have kids of their own or not. If they are used in the correct way, grids and nets can provide an adequate safety system that will allow people to enjoy the garden and admire the garden pond, without fear of having an accident.

To ensure pond safety, there are a few steps you can take.

Erecting a fence around the pond helps keep kids away from it, and growing plants around the pond edges can also act as a barrier. A pond that has gently sloping edges is safer than one with a sudden drop into the water. A small pond may be covered with some sort of safety grid or net that sits just below the surface of the water.

It is crucial to buy a reputable model that is guaranteed not to dip below the surface of the water if it has the weight of a child on top of it. It is also important to make sure it can be secured so that a young child is not able to crawl underneath it and fall into the water. Many types of safety covers are available to buy, or you could fashion your own from steel mesh and heavy duty wood trellises, but make sure you are confident in your construction abilities so that you have the peace of mind that your safety cover will do the job.

Other pond safety precautions to take concern electrical and chemical safety. If you are using electric filters, pumps or lighting you need to make sure they are correctly installed and checked on a regular basis.

Illuminating the pond at night makes it safer, however you must make sure all cables and equipment is kept in proper working order. As soon as a fault is detected, the appropriate repair or replacement should be carried out. Circuit breakers are recommended to help prevent potentially fatal accidents. When it comes to pond chemicals, make sure you follow the instructions provided and keep kids away from the pond until it is safe.

The best advice for garden pond safety is to educate your kids. Make sure they are aware of the potential dangers of the pond, and always supervise youngsters if they are playing around the pond area. It is also important to have suitable safety features in place, however, as young people cannot always be relied upon to listen to advice.