Tammy from Iowa wrote to us recently and asked, “We have a small pond, maybe 800-900 gallons. Is it possible to have to strong of a bubbler going? We have about 15 fish and its about 40 inches deep in one spot. We live in Iowa and it will be soon be freezing. Just wondering if too much bubbling can hurt the fish?”

Answer: Tammy thanks for the question! I like to use a small aerator in garden ponds during the winter months, but I would suggest either providing a way to float the air stone or diffuser off the bottom and near the surface of the water, or moving it over to an end of the pond, or even a shelf if you have one. I mention this because you have 4 feet of water depth which is very good. It’s deep enough to allow the fish to go to the bottom and settle there when the weather get’s really cold. The water may be a bit warmer there, and ideally you don’t want to disturb that water, but only keep a bit of the surface agitated. 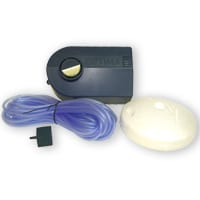 Unlike the important use of aeration during hot weather, which is a time when oxygen can get low in pond water, in the winter you don’t generally run into that problem so the main benefit of an aerator is to keep a spot of ice open when things freeze up.

Since we’re on the topic of small ponds and winter freeze ups, let me note here that most experts suggest having at least two feet of depth in a pond in order to overwinter fish safely. If there’s any doubt about your ability to winter fish in safety, then it’s probably better to just create an indoor holding tank that’s warmer, well aerated, and filtered adequately. 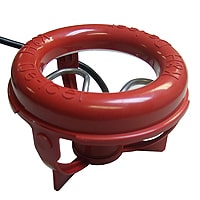 The other option, which can be used together with an aerator, or totally on it’s own is a small pond heater. Most of these are designed to float or be kept at the surface and they’ll do a pretty good job of keeping the ice open even in really cold weather. A few models have detachable floats that keep them near the surface, but they also can be placed at the bottom of the pond to keep more of the water warmer. In most cases, the most important part of this work is really to keep the surface open so that any gases, and things that build up in the water can be released and not trapped under the ice.

Ideally I think in the coldest of conditions, a pond heater is a better choice than an aerator.  These are generally pretty affordable and all you need to do is plug them in.  It needs to be kept in mind that they won’t simply turn on once they power up.  Many of these heaters come with a thermostat built into them so that they only come up, and use power, when the water may start to freeze up.  Above that temperature they’ll remain turned off.

In Iowa we can get a few periods of some really cold weather, such as in January and early February.  If you know some really cold stuff is coming along, then I would have the heater in place and use it as needed.  If you want to run an aerator near the surface when the temps aren’t so brutal there’s nothing wrong with that at all.

Once the weather begins to warm up again, you can eventually move the air stone from the surface, or a shallow area, and back into the deeper part of the pond when the summer comes along.  In other words, we want to aerate the entire pond during the summer, and only a small part of it during the winter.  So bubbles won’t bother the fish at all if you set things up right based on the seasonal needs.