Green Clean algaecide, as well as a number of other brand-named products use a form of peroxide, Sodium Carbonate Peroxyhydrate to be more precise, in their granulated pond algae treatments.

Pond algaecides made from Sodium Carbonate Peroxyhydrate, which is a blend of sodium carbonate and hydrogen peroxide, work as oxidizers and can kill or damage algae upon contact with it.  It is intended to be an option to more traditional algaecides which contain copper, which is regarded as highly toxic to algae and potentially dangerous for fish.  Products that use SCP generally have a good safety profile when used as directed, but care should be taken when handling and applying any algaecide to a pond environment, and particularly those that have fish in them.

Pond products containing peroxide have been used for 10 to 15 years now and as time has gone on, more versions of the popular treatment have come along.  Brand names that are commonly found now include:

Of these, Green Clean and Algae Off are the most well-known, but essentially all of them are similar in formulation (though percentages of the active ingredient may vary some), and all work in a similar fashion.

The formulations are made up of combinations of sodium carbonate and hydrogen peroxide.  The label identification for the active ingredient in the blend will either read as Sodium Carbonate Peroxyhydrate or Sodium Percarbonate.  They are essentially the same thing. 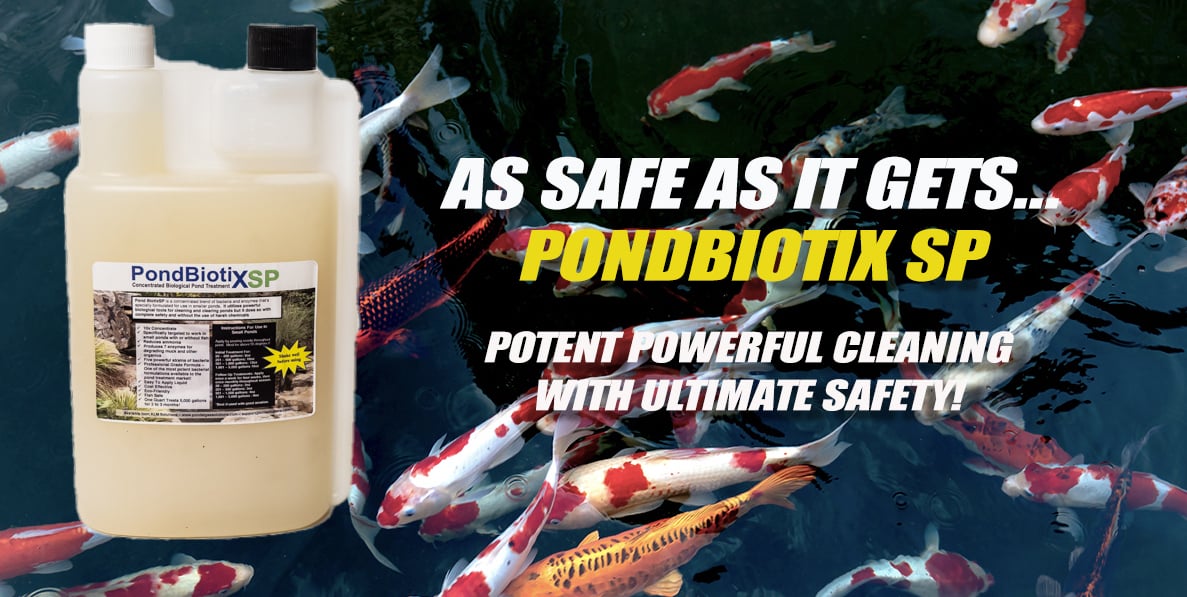 Below is a table showing the amount of active ingredients in the various brands mentioned above.  Noted is how the product is labeled for SCP or SP and their concentrations.  Three of the products are registered with the EPA as algaecides while the other three are simply labeled as rock and waterfall cleaners or general pond cleaners.  The designation only indicates that the manufacturer took the time and expense to get the product approved by the EPA to be listed as an “algaecide”.   Again, all work in a similar fashion.

How Peroxide Based Algaecides Work

Upon entering the water or making contact with a wet surface, the peroxide is released and does its usual fizzing and bubbling, much like it does when applied to a cut on a finger.  The byproduct of this action results in the end products of oxygen, water, and some natural soda ash.  All eco-friendly and biodegradable.

For a very short time during this reaction in water (and in its dry state I might add), the product is caustic, and it will damage the cell wall of the algae. This is what will eventually kill the plant.  Hydrogen peroxide also has some properties which can help dissolve biofilm, which is what the algae use to attach to rocks and surfaces.

Why Peroxide Based Pond Treatments Are Safe

Pond algaecides like Green Clean or Algae Off are considered fairly safe when used properly in fish ponds.  Their main benefit is that they oxidize or transition to inert substances (oxygen and water) pretty quickly.  There is no chemical residue left after 30 seconds or so.

This type of algaecide also can work in a broad range of water temperatures and conditions.  Things like the pH of the pond water don’t affect the treatment effects or the safety profile of the product.

In contrast, with copper-containing algaecides, the pH and alkalinity have a strong effect on the treatment outcome.  At the extremes of pH and alkalinity readings,  these levels can make the copper product completely ineffective on one end, to highly toxic on the other.  This phenomenon is discussed in more depth in this article on pond ionizers.

Precautions With Green Clean And Other Peroxide Based Algaecides

Despite the reported safety of peroxide-based treatments, people do still run into problems with them sometimes.  Notably, the vast majority of complaints revolve around damage to desirable pond plants or dead fish following a treatment.

In the case of the plants, it needs to be remembered that peroxide works through its caustic actions on contact with the algae.  The same trait applies to any plant that the treatment may come in contact with.  If enough of the granules make contact with a plant and depending on how sensitive it might be to such things, it’s quite possible to damage the desired plant enough to kill it.  Therefore care should be taken when applying the peroxide around any plants you want to protect.  Remove or shield them if possible during the application.

The issue with fish is often more related to how or when the algaecide product was applied versus the safety of the treatment itself.  Any pond treatment that is designed to kill algae or a weed can lead to some challenges for fish.

If one kills too much of the plant off at one time, or if the temperatures are quite warm, as the plant dies it will pull oxygen from the water very rapidly.  The more plant mass that is killed, the more oxygen will get reduced.  Couple that with the fact that pond water cannot retain oxygen well in temperatures above 78 degrees, and you have a recipe for some adverse effects on fish.

The workaround on this is to first, treat only smaller sections of the algae at one time.  Take your time and work over the algae in a slower fashion, taking hours or days, instead of minutes.  Treat the pond if possible when it’s cooler.  And finally, make sure there is good robust aeration in place to protect the fish from oxygen deprivation.  A waterfall may serve the purpose, but even that may not be enough in every case.

I personally do not think most of the manufacturers do enough to include this kind of advice on their labels.  It would go a long way in reducing any unintended negative consequences when using the products.

In regards to safety concerns, I would be remiss to not mention that you want to make sure not to leave any undissolved granules around.  Since they are caustic, it would not be good if a bird, bee, a pet, or other critter got a hold of one.  Make sure that everything that’s applied to the pond gets dissolved properly, and any leftover granules be stored securely in a closed container.

The Limitations Of Peroxide Treatments In Ponds

For many pond owners, algaecides with peroxide in the formula do work pretty well.  The fizzing action once applied to the water can help loosen up debris from the bottom of the pond making for easier cleaning and maintenance there.  Of course, on contact with algae, the treatment can often damage and kill the plant, and being granulated and very targetable, it’s easy to treat certain areas, like rocks or waterfalls with better accuracy and less waste.

That all said, the products do have a few limitations.

The most important of these is that that the effective treatment life span, is very short.   On the one hand, the products are very safe to use…there is no chemical residue to worry about, but that also means there is no ongoing, lasting control of future algae blooms.  Other algaecide products do tend to have a longer period of control in comparison.

This is one of the reasons that I don’t usually recommend peroxide-based algaecides for treating green water.  First, it’s very hard to target compared to string algae, and second, it can come back very quickly after the treatment because there’s nothing left to restrict it from a re-bloom.  If someone wants to try peroxide on green water, I would do so with reasonable expectations.  If you don’t see algae come back, great…but if you do, don’t be too disappointed, and consider using something else instead, such as another type of algaecide called AlgaeFix, or a UV clarifier.

Algaecides like Green Clean and the others mentioned above, can all be used effectively on string algae, and on the algae that cling to rocks and waterfalls.  It is more effective on algae at the surface than below the surface and it should be kept in mind that in all of these instances, it’s possible that re-application may be necessary to knock all of the algae out.  For this reason, dosage rates can vary quite a bit for effective application.